I recently had an error with my Dropbox account that caused me to go through a bunch of my files in order to clean up a bunch of trash on my hard drive.

I found this little drawing that I made with the intention of creating a blog post, but I don’t think I ever actually wrote this thing up.

If you’ve been on this newsletter for a few years, you may remember me writing about Gretchen Rubin’s “Four Tendencies” framework.

I’ve personally found a lot of personality psychology to be extremely helpful in working with clients and running a business since – well – most people are not like me and I don’t understand what the hell they’re thinking.

While there’s a lot of pseudoscience and frameworks that are really just about one step above a shoddy Buzzfeed quiz (“You know you’re a [INSERT TYPE OF PERSON] if you [INSERT SHARED GROUP EXPERIENCE]”), I’ve found it helpful to understand a variety of different frameworks and attempt to relate them back to the more evidence-based big five model of personality.

The big five model of personality is based upon the idea of five independent personality “knobs” that can be dialed up or down in individuals – these knobs are:

•Openness to experience: Openness reflects the degree of intellectual curiosity, creativity and a preference for novelty and variety a person has

•Conscientiousness: Tendency to be organized and dependable, show self-discipline, act dutifully, aim for achievement, and prefer planned rather than spontaneous behavior

•Extraversion: Energetic, surgency, assertiveness, sociability and the tendency to seek stimulation in the company of others, and talkativeness

•Neurotocisim: The tendency to experience unpleasant emotions easily, such as anger, anxiety, depression, and vulnerability.

Gretchen’s model of four tendencies seems to be built one layer up  from the big five model.

She phrases things in terms of “meeting your own expectations” and “meeting the expectations of others” – which I view as proxies for traits conscientiousness and agreeableness, respectively.

I drew my own version of the Four Tendencies model below with the axes of the graph representing the percentile of conscientiousness and agreeableness. 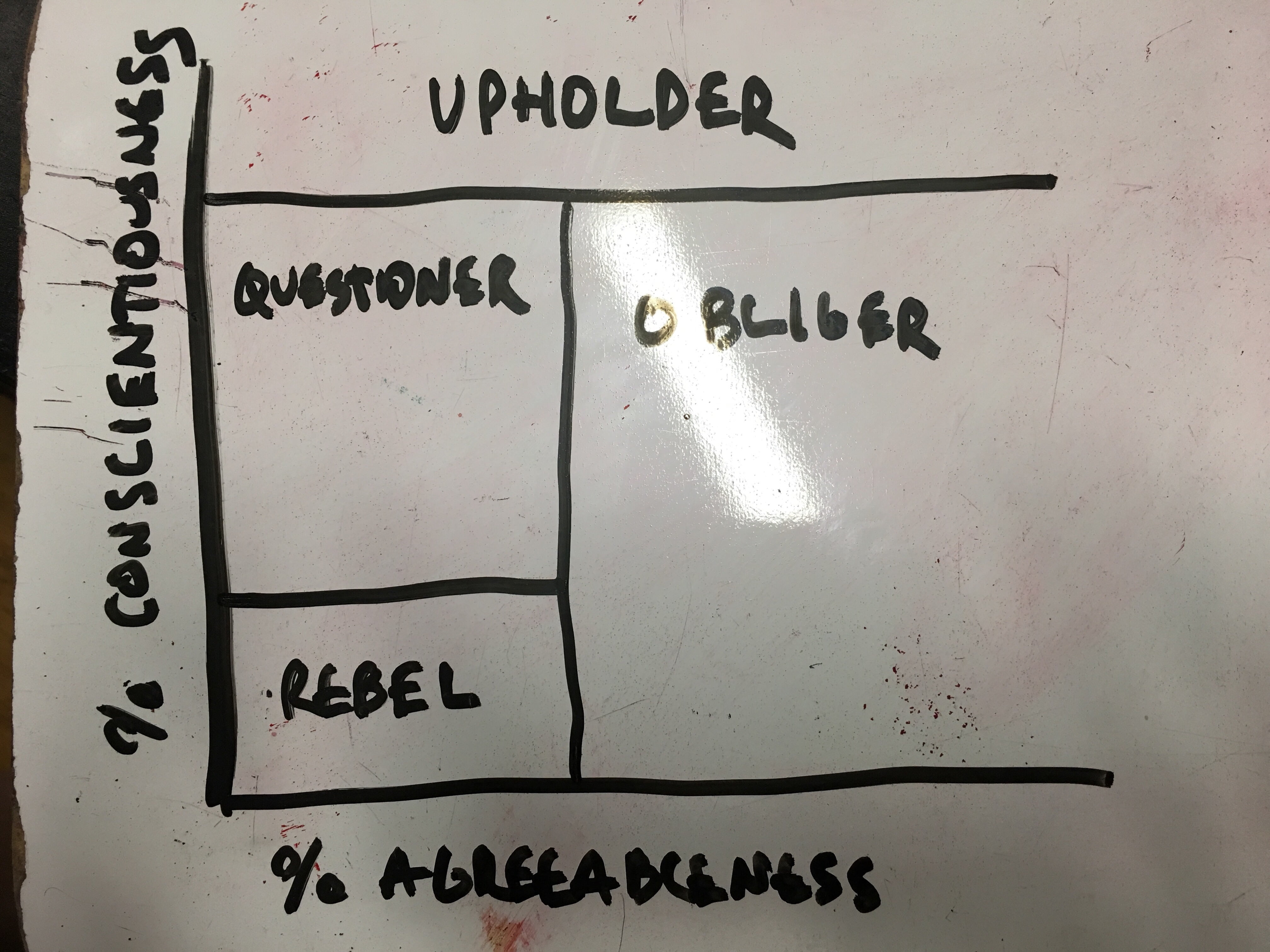 So, what’s going on here?

I think that anyone above a certain percentile of conscientiousness would be an “upholder” in Gretchen’s model – someone who views tasks and expectations as duties that must be completed. These systematic people live to complete the tasks laid out before them – whether assigned by themselves or assigned by others.

I can personally speak to the Upholder mindset as someone who tests as very high on conscientiousness and very low on agreeableness in the Big Five model.

These people don’t necessarily feel the overwhelming compulsion to complete tasks regardless of source that the high conscientiousness Upholder does, but they will either relentlessly pursue things that make sense to them and their own priorities (Questioners) or fight to never let anyone down who they care about (Obligers).

Below a certain threshold of both conscientiousness and agreeableness, we have the Rebel. These individuals struggle both to meet their own expectations and the expectations of others. “You can’t tell me what to do, and neither can I.” Rebels are interesting, since they often frustrate those around them as well as themselves with their seeming capriciousness and lack of follow-through.

I would also posit that we could include a Z-axis on the above graph with “% Openness” as the axis. I think the structure of the above diagram would remain similar, but the line of conscientiousness above which someone becomes an Upholder moves higher up the lower someone is in trait openness.

Anyway, I read this Gretchen Rubin book kind of awhile ago and I still think about the practical takeaways from it consistently when working with clients and staff – so I would highly recommend it even if it may not be a perfectly evidence-based iteration of personality psychology.

PrevPreviousA return to trust in expertise
NextShould you work on your weaknesses?Next