The Repugnant Conclusion and why it Violates our Moral Intuitions

The “repugnant conclusion” is an uncomfortable bit of philosophical reasoning first presented by Derek Parfit.

For a detailed discussion of the repugnant conclusion, check out this article from Stanford philosophy.

Consider a population where we can measure “well-being” which aggregates everything that makes life worth living into one, rolled-up measure.

(People often get tripped up here, so consider that this includes everything in one aggregate measure. This measure is not quite the same as “happiness.” Pain, loss, sorrow, profundity, fulfillment, pleasure, etc. are all included here – as are the trade-offs between doing something unpleasant to achieve a positive outcome, etc. Any sort of Malthusian population dynamics are also accounted for in this aggregate measure of well-being, as are any amounts of individual dissatisfaction based upon inequality. You may dispute that a single measure can capture all of this information, but, for the sake of this thought experiment, assume that it can.) 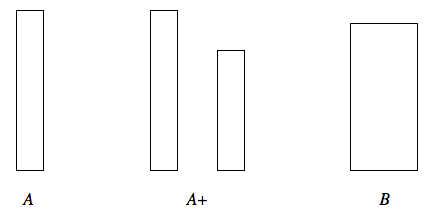 Then, assume we have a population A+, which is the same as population A, except we are adding an additional population with lower well-being than population A (although everyone still has a relatively high well-being).

Population A+ seems obviously “better” than population A (or at least not worse), as there are more people with positive lives – and the total well-being of the entire group is higher.

Then, assume that there is a population B with the same number of people as population A+.

However, their well-being is averaged across the population such that the total well-being is the same as A+. Rather than having two groups with different well-beings, we now have one group with the same well-being.

If we continually perform this operation, we end up with a population Z with very low well-being (but still net positive lives).

So, we’ve show that a very large population with lives just barely worth living is preferable to – or at least not worse than – a smaller population with a much higher well-being for each individual.

Feels rather repugnant, doesn’t it?

There have been a lot of attempts to reason around the repugnant conclusion, but many of these attempts themselves result in bizarre conclusions themselves (termed the “sadistic conclusion” and the “absurd conclusion” – see the Stanford article for further discussion.)

I think that the best way around the repugnant conclusion is by questioning the additive properties of well-being. This is touched on here in the Stanford article.

If you asked how many ants would have to have perfect lives to make it acceptable to kill one human being, most people would say “none.” In effect, they are saying that no number of ant lives is worth one human life.

Think of this like Class A and Class B voting shares in a corporate structure. We could theoretically create an organization such that, while Class B shares are able to vote, they cannot change the outcome of a decision if the majority of Class A shares vote in a certain direction.

We can imagine “tiers” of well-being that are created based upon something like diagnostic criteria for complicated syndromes and disorders. Something like the Beighton score for joint hypermobility – if you have 5 of these 9 criteria, then your life and well-being cannot be offset be anyone with less than these numbers.

Instead, I think our intuitions follow something closer to a desert-based approach to human well-being.

Simply by virtue of being human, each individual deserves a certain quality of life.

So, imagining all of these people with net positive lives that are just barely worth living violates our intuitions.

Here’s a more detailed explanation in the Stanford article.

This approach, however, doesn’t quite avoid the repugnant conclusion. Instead, it just moves the line for what we would consider a “net positive life.”

So, now we just have a different threshold above which lives must exist in order to be “positive,” and we can still run through the operations to generate a repugnant conclusion.

While maybe not quite as repugnant, I think we now just have a “distasteful conclusion.” Still, I do think this is why most people’s moral intuitions are immediately violated when they first understand the repugnant conclusion.