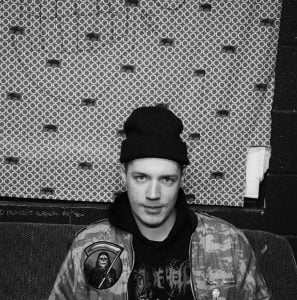 I first met Dylan at a show that I was booking probably back in 2011.

Just checked my e-mail, and yes – it was 2011. And Dylan was weirdly e-mailing me from Spencer’s e-mail address. Have some boundaries, guys.

As a supporter of the DIY punk, hardcore, and metal scenes, I facilitated a subcultural event that involved doing a workout, playing extreme music, and feeding an apparently malnourished group of youths in Full of Hell some sort of enjoyable scramble of treats.

Since then, Full of Hell has gone on to become a force of nature. They blend grindcore, powerviolence, power electronics, and death metal in a totally cohesive (aka not post-modern jumbled mess) layered mess of aggression.

Full of Hell is an insane live band. Please observe:

And, if you favor such sounds, please also listen to their most recent album Trumpeting Ecstasy. I think it’s really wonderful.

Check out Dylan and Full of Hell here: