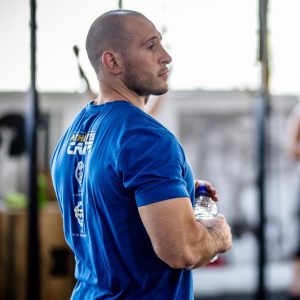 “An alpha hippie is a tree-hugger who can rip out the tree and smash you with it, too.”

I’m not huge on inspirational quotes, but I think that quote has inspired me.

Angelo is one of the most interesting people I know – which is saying a lot because I know a lot of freaks (and you may have heard some of them on the podcast).

We first met way back in 2011. I was a new CrossFit coach and he had recently opened O’Hare CrossFit. Since then, we’ve both continued to learn and soak up information – which is pretty fascinating to see from two totally different personality types.

Angelo has built O’Hare CrossFit into a thriving business, which is much, much harder than it seems in this market, and he was also head of coaching for Barbell Business/Barbell Logic – which means he was overseeing the coaching for 100s of gyms.

Check out this conversation to learn what bizarre depths Angelo will sink to in order to keep learning, how he finds mentors, how he changed how he changed his on mindset and relationship with conflict despite having tons of success, how he helps business owners prioritize what they need to work on, and why strange men harass him because of his chest.

Check out Angelo and O’Hare CrossFit